Top Stories from Independent Journalists Across the Web
Giuliani: Votes from 28 states were sent to Germany and Spain to be fraudulently rigged by Smartmatic
By ethanh // 2020-11-22
Mastodon 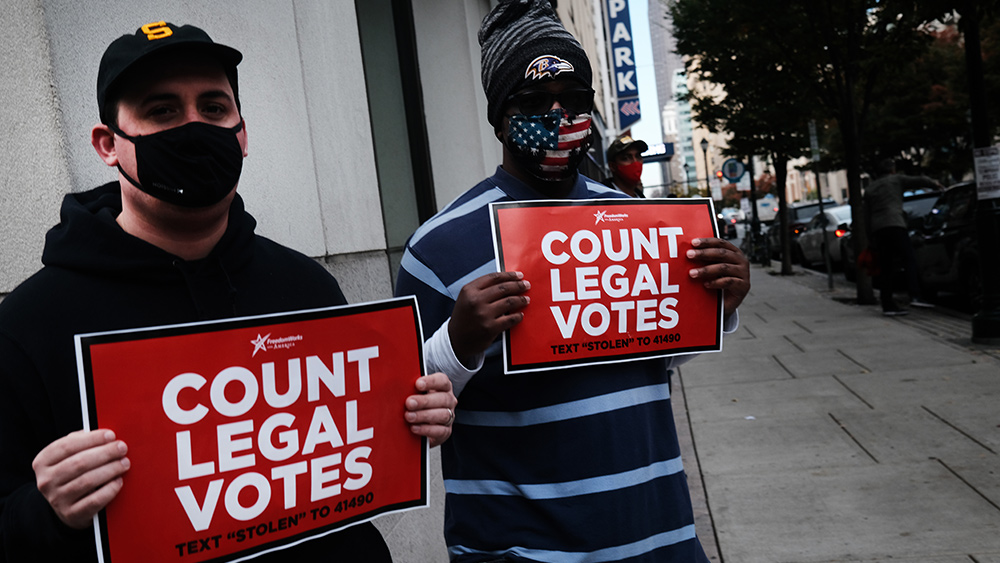 What do Venezuela, a third-world socialist nation in economic ruin, and the United States have in common? Everything if we are talking about the fraudulent 2020 election. Believe it or not, the very same voting machines and technologies used to install dictators in Venezuela are now being used in the U.S. to rig elections for Democrats like Joe Biden, whom the mainstream media is already declaring to be the 46th president. Speaking to Lou Dobbs during a recent interview, Rudy Giuliani, President Trump's lawyer, revealed a number of bombshells about how the left is attempting to steal the 2020 election, including with the help of Dominion Voting Systems that run Smartmatic software. In 27 or 28 states, Giuliani explained, votes were tabulated off-shore in Germany and Spain. And in almost every state where this process occurred, vote "irregularities" were observed that appear to have shifted the tallies in favor of Biden. Giuliani and the Trump team are in the process of fully unraveling this fraud, but we know already that things are changing. In Nevada, for instance, the five-member county board of elections in Clark County, which covers Las Vegas, decertified as the winner a Democrat, who was replaced with a Republican. Confirmed irregularities in the form of improperly verified signatures led to the overturning of that race, and Giuliani says the same thing happened to Trump, the potential ramifications being that Trump could end up winning Nevada. In Pennsylvania, some 8,000 illegal ballots were identified and Giuliani and his team are pushing to have those thrown out, pending a Supreme Court ruling. At the same time, Pennsylvania has declared that poll watchers need not be able to see ballots being counted in order to meet state guidelines for election integrity. The Supreme Court ruled in a 5-2 decision in this case that a poll watcher merely needs to be in the room, this being a loss for Team Trump. "Pennsylvania is now the only state in the country ... that doesn't allow inspection of mail-in ballots," Giuliani indicated. https://twitter.com/LouDobbs/status/1329191588216639493

Concerning Dominion, a whistleblower has come forward with claims that he or she observed serious problems with vote counts, particularly during the "wee morning hours" the day after the election. "The circumstances and events are eerily reminiscent of what happened with Smartmatic software electronically changing votes in the 2013 presidential election in Venezuela," this whistleblower noted, adding that all of the anomalies conveniently benefitted Biden at the expense of Trump. Giuliani is fully aware of all this, explaining that Dominion systems were invented in Venezuela "specifically to fix elections – that's their expertise." Carolyn Maloney, a Democrat senator from Manhattan, revealed all of what Giuliani is now saying back in 2006 and 2007 when she warned that the U.S. should not adopt Dominion systems because they were built for fraud. "We shouldn't be using this company that was founded by Chávez to call votes in America because their specialty in Venezuela is cheating," Giuliani added, further noting that Dominion is "a far-left radical company" with high-level people within its ranks that are avowed supporters and members of the domestic terrorist group Antifa. We reported on one just the other day who goes by the name of Eric Coomer, this particular individual having written lengthy, vulgar diatribes on his social media pages blasting Trump and telling any friends who support Trump to defriend him. "All parties involved in the decision to have our votes go to another country deserve the maximum sentence in the worst prison that this country has," wrote one incensed commenter at The Gateway Pundit upon hearing the news. To keep up with the latest news about election fraud, be sure to check out Trump.news. Sources for this article include: TheGatewayPundit.com NaturalNews.com
Mastodon
Parler
Gab
Copy
Tagged Under:
Venezuela fraud election rigged Joe Biden election fraud votes vote fraud President Trump antifa Rudy Giuliani giuliani Lou Dobbs cheaters counting Dominion Voting Systems Smartmatic 28 states outsourced Sequoia Voting Systems
You Might Also Like